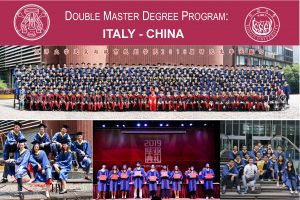 The Dual Master Degree in Building Engineering and Architecture is an educational path that offers to participants the title of:

This program offers big opportunities to both Chinese and Italian students.
In July 2010 the University of Pavia and Tongji University of Shanghai signed an agreement to activate a Double Degree program between the Master Degree in Building Engineering and Architecture EU “Corso di laurea magistrale a ciclo unico in Ingegneria Edile-Architettura (Classe LM-4 cu.) in English language and the “Master of Architecture” (Shuoshi) of Tongji University.
It begun in academic year 2011/2012: fifteen Chinese students from Tongji University of Shanghai and six students from University of Pavia attended one year in Pavia and the next in Shanghai. There, in June 2013 they attended a thesis defense and all Chinese students and two Italians got the Double Title.
The class is composed by selected students:

Italian students who got the Double Degree

Chinese students who got the Double Degree